About 26 million Americans, roughly 1 in 12, have diabetes mellitus. Among these, 1 in 4 is undiagnosed, and another 57 million people are pre-diabetic – on the verge of having the disease. Diabetes costs the U.S. taxpayers approximately $200 billion a year.

Over 90% of the diabetes in the U.S. is type 2 diabetes. It is most common in developed nations, perhaps due to the prevalence of Western-style diets and inactive lifestyles. One clue as to whether diet has a big influence or not, is the fact that in the animal kingdom, diabetes is most often found among dogs and cats. The companion animals that live with us, and often eat what we eat.

Globally as of 2012, an estimated 346 million people have type 2 diabetes. And the worldwide number of diabetics is expected to double by 2030. No cure exists, and chronic diabetes can lead to vascular diseases including atherosclerosis, heart disease, stroke, peripheral vascular disease, and damage to vessels in the eye, kidneys and nervous system. It's been suggested that even Alzheimer's and dementia may be connected to diabetes.

There are two main types of diabetes. In the simplest of terms, with type 1 diabetes you do not produce enough insulin, and with type 2 diabetes you can't effectively use the insulin you have – insulin resistance. Type 1 usually requires taking insulin and type 2 requires medication or insulin, or sometimes both. High blood sugar is the unfortunate result in both conditions.

Type 1 was previously known as "juvenile diabetes" or "insulin-dependent diabetes mellitus" (IDDM).Type 2 was known as "adult-onset diabetes" or "non insulin-dependent diabetes" mellitus (NIDDM). Recently, science has seen increasing numbers of juveniles with type 2 diabetes and increasing numbers of adults with type 1 diabetes. It's believed that type 1 is partly inherited and then triggered by an environmental factor, possibly an infection. And it's believed that type 2 is due to lifestyle factors including diet, stress and exercise, along with genetics to a lesser degree.

During digestion, simple carbohydrates are broken down into complex and simple sugars - including the monosaccharide glucose. In response to blood glucose levels, the hormone insulin is produced in your pancreas by beta cells and released into your blood. Your body uses insulin to help absorb glucose from your blood into cells as fuel, or to store for later use. Glucose is a main source of energy for your cells. Maintaining a comfortable glucose level in your blood is a balancing act for your pancreas (releases insulin to use glucose) and your liver (stores glucose for later release when needed).

Recent research, suggests that there's a key inflammatory process at the onset of diabetes involving a protein molecule that leads to cellular stress and eventual death of the pancreas' insulin producing beta cells. This inflammation is activated through another protein known as interleukin-1. As with other immune system disorders, inflammation may play a critical role in the origination and continuation of diabetes. Prebiotic fibers can contribute to a better functioning immune system in the lymphoid tissues of your gut, which can in turn help to moderate inflammatory responses in body tissues.

An October 2012 report in Nature, found that type 2 diabetics have higher levels of pathogenic bacteria in their guts, and lower levels of beneficial bacteria. In other research, scientists have reported that diabetes subjects benefited from dietary support from xylo-oligosaccharide (XOS), which proved effective in improving blood sugar and lipids in type 2 diabetics. XOS is a prebiotic fiber found in ProBiotein and might be helpful in fighting diabetes. 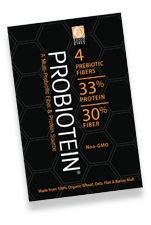 'Fibre Is The New Protein'

"With only 9% of adults getting the recommended amount of dietary fibre a day, the UK's Food and Drink Federation has launched a new initiative to boost the nation's fibre consumption."

The Effects of Nutritional Yeast for Cancer

"Researchers have found that beta-glucan fiber in brewer’s, baker’s, and nutritional yeasts may 'enhance the effect of anticancer chemotherapy or radiation therapy and have a positive effect on the survival and quality of life of cancer patients.' "

"It is the normal interaction between all these players in the gut ecosystem that determines not only gut health, but also our overall health."

“The gut microbiome, so to speak, is this collection of hundreds of trillions of microorganisms — most of them bacteria — that live in our gastrointestinal tract. And they form a very complex ecosystem that does a number of things that contributes to our health and our wellness. For example, the microbiome plays a major role in training our immune system.”

“Published in ‘Gut’, the study found that associations between gut microbiota composition, levels of cytokines and inflammatory markers in patients with COVID-19 suggest that the gut microbiome is involved in COVID-19 severity, possibly via modulating host immune responses.”